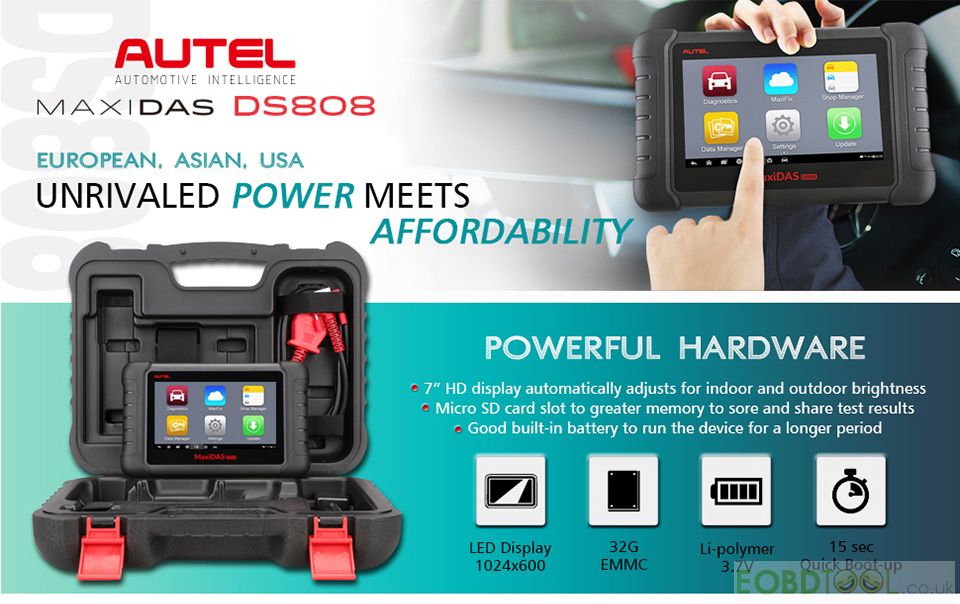 Amazing tool. I finally got the Maxidas DS808 after about a year of looking at them and going back and forth with The Snap-on and Matco tool trucks about their scanners. I have used this scanner for two weeks now and have plugged into several vehicles from a 2002 Volkswagen Beetle to a 2014 Chevy Silverado with no issues. I figure this scanner has saved me a total of $950 in jobs already. So it’s already paid for it self. Continuing on this line I’ve estimated the unit to actually be worth it’s weight in gold over the life of the scanner. Lol. I was able to preform a transmission line pressure test on a GMC Acadia and reset the adaptive learn programming to fix a slight shifting issue, TPMS on a 2014 Silverado, corrected a TPMS issue and engine warm up sequence issue on a 2012 Dodge Durango citadel, troubleshoot and correct a serious electrical problem on an 02 VW beetle and more. If you are thinking about buying this scanner don’t think any longer just buy it.

This is a very useful tool for me. I am a mechanic and this tool gets me deep enough into troubleshooting for the model/year cars I own and friends I help. There are more powerful units out there but the price point was right on for me.

So I’ve been working on cars for a few years and have used snap on tools hay are 10x the money and do half the functions that the DS808 does, it has any brand I can think of and more, tons of functions test, live data and configurations of certain components when replaced. Great diagnosing tool . Never write reviews but decided to write one because I am impressed at the way this tool works and much more than what I was expecting would definitely buy another one or an upgraded version if I needed a second one